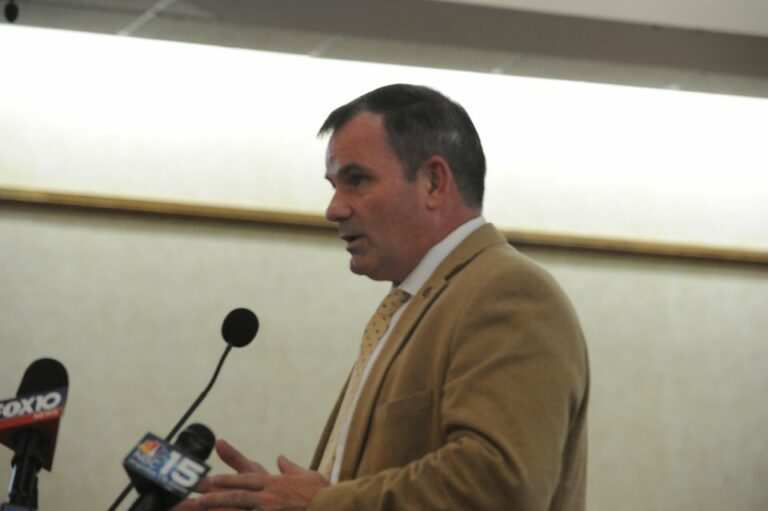 An Alabama state House member has been removed as a Captain with the Mobile County Sheriff’s Department due to his political views.

State Rep. Shane Stringer, R-Citronelle, is “no longer a Captain with the Mobile County Sheriff’s Office,” a spokeswoman for Sheriff Sam Cochran, a Republican, announced in an email to the media on Friday.

“Sheriff Sam Cochran made the decisions Wednesday, May 12, because of different political views held by his administration,” spokeswoman Lori Myles said.

Stringer joined the Cochran’s staff in 2018, the same year he was elected to the Alabama House of Representatives.

Myles later told AL.com that Stringer’s sponsorship of legislation supportive of constitutional carry ran afoul of the Sheriff’s views on the issue. Stringer has also backed legislation forbidding state and local law enforcement agencies from enforcing new federal gun laws or executive orders, which has been a concern among law enforcement personnel as well.

Alabama lawmakers could, during the final day of its legislative session on Monday, vote on a bill that creates a constitutional carry provision in Alabama in which residents would be allowed to carry a concealed pistol without having to obtain a permit or pay a fee for one. The legislation has long been opposed by law enforcement, including the state’s sheriffs, who argue that permits are a safety tool for them whenever they are making traffic stops, serving a warrant or conducting an arrest.

Stringer, in a news release, said he is “proud to stand in defense of the Second Amendment gun rights of Alabamians despite being fired by Mobile Sheriff Sam Cochran for his position on the issue.”

“The Second Amendment gun rights of Alabamians are under attack from a liberal federal government that is out of control and even from some factions right here at home,” Stringer said. “After dedicating my life and career to law enforcement, losing a job because I stand in support of Alabama gun owners is certainly surprising, but nothing will discourage me from defending the constitutional guarantees promised to all of us as American citizens.”

He said he felt that local sheriffs are opposing constitutional carry legislation because they depend upon the fees the gun permitting process generates for their offices.

“The U.S. Constitution does not say you have a right to keep and bear arms as long as you pay what amounts to a gun tax in the form of permit fees,” Stringer said. “It says you have the right to keep and carry firearms … period.”

Myles said Stringer was appointed as Captain and that he will no longer hold any position within the Sheriff’s Department by the end of the month.

“I think they agreed to disagree,” Myles said of the two. “But when you work for a company, you have to abide by the company’s philosophies and rules especially when you are part of a staff where everyone answers to the Sheriff. We have to be of one accord.”

Myles added, “He would be a great hire for someone. He’s been in law enforcement. But at the end of this month, he will end his career being on staff with us.”