Military families struggle with food insecurity — before and during the pandemic 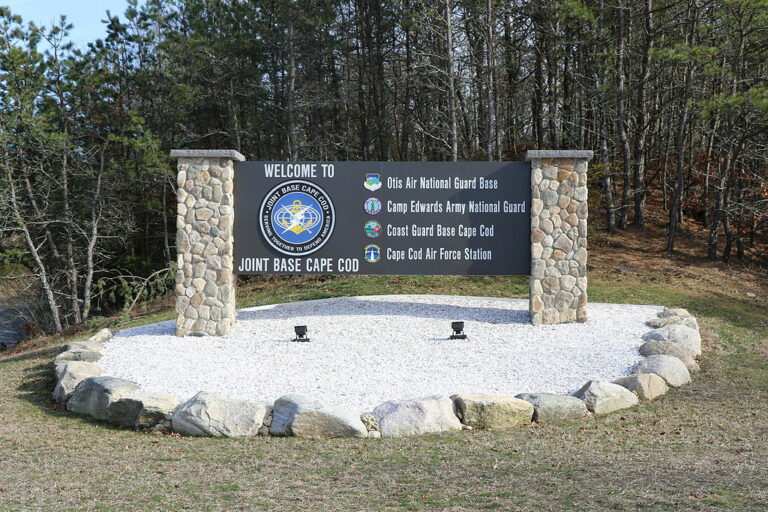 For Natasha Pearson, being a stay-at-home mom during the COVID-19 pandemic has had its financial challenges.

Pearson lives on Joint Base Cape Cod with her husband, David, an electrician on board the U.S. Coast Guard Sanibel based in Woods Hole. Also in tow is their 9-year-old son and 5-year-old daughter.

The family moved to Cape Cod two years ago after a short stint at a training center in California.

Since moving here, the family has been living largely off one income, which Pearson said is “definitely hard.” Pearson has worked limited hours as an assistant at a Sandwich orthopedic office while also taking nursing classes at Cape Cod Community College.

Her family wouldn’t be able to afford to live on the Cape if it weren’t for government housing, Pearson said.

Before the COVID-19 pandemic hit, an “empowerment center” run by the Massachusetts Military Support Foundation on the base gave away food, clothing and children’s toys.

Pearson called the center “an amazing place” and said visiting weekly helped her family save money on groceries, leaving more money to budget for other necessities. But the center has been closed due to safety concerns brought on by the pandemic, Pearson said, and with her children eating at home more with remote learning, she has turned to help from drop-off sites instead.

The center remains closed, but officials said they plan to reopen it soon.

The statewide support foundation has stepped up to provide similar services for military families in the base center’s absence. One way is every Tuesday morning since the pandemic began, from 10 a.m. to noon, volunteers gather outside the Sandwich Empowerment Center — a metal storage unit filled with prepared boxes of food — and wait for active-duty personnel, military families and veterans to come by and pick them up.

Located next to the Sandwich Fire Department station at 117 Route 6A, volunteers have gathered outside in the rain, wind, snow or bitter cold to load up cars for people in need of some extra food.

Dan Miville, of Yarmouth Port, a U.S. Marine Corps veteran, has been volunteering with the organization since last year. He said it gives out 50 to 60 boxes every Tuesday. The majority of people who stop by are veterans, he said, though some are spouses of active-duty personnel.

The new empowerment center is run by the volunteers, mostly retired men and women who have found a sense of community there.

“They love their country and want to give back,” said state Rep. Steven Xiarhos, R-West Barnstable, who volunteers with the military support foundation.

“If you have a young family with children it can be difficult to make ends meet,” Xiarhos said, noting the center on the base has typically helped people “stretch their budget.”

Food insecurity for local military personnel was a problem before the pandemic that has only grown during these months of reduced job hours, remote learning for children and other uncertainty.

Also stepping in to help has been the Falmouth Service Center, which has a program called Fresh Market. Twice a month, volunteers go out to Joint Base Cape Cod and give out nonperishables along with fresh produce, meats and dairy items.

The program has been running for a number of years, and since the pandemic hit the service has been tweaked from a farmers market style to a prepackaged choice that members can pick up, according to the organization’s executive director Kerin Delaney.

When there is not a pandemic, the service also provides nutritional information, lessons and children’s activities, Delaney added.

“It is very expensive to live on Cape Cod for everybody and we are just trying to provide those additional resources,”she said.

When it’s open, the empowerment center on the base has a downstairs area that includes a food pantry, with refrigerated fresh foods and pastries, and an area for items like clothing and toys. Everything is free from the nonprofit support foundation.

The Massachusetts foundation runs numerous food distribution events throughout the state, and has opened more for everyone since COVID-19 hit, according to Paul Rifkin, a volunteer. But the base center’s other services have been missed.

“The thing that is desperately needed right now is closed,” Rifkin said.

The need for help extends beyond the military. Events held by the military support foundation — almost 100 on the Cape alone since the start of the pandemic — aren’t restricted to active duty personnel or veterans, Rifkin said. Since COVID-19 hit the region, they haven’t been turning anyone away.

“I don’t think people really understand how many people are in need,” Rifkin said. “Many people in the country, in New England and on Cape Cod, don’t have enough food to feed their family on a weekly basis.”

Michelle DeSilva helps run Cape Cod 4 The Troops, which sends care packages to service members abroad and provides additional resources to those on Cape Cod. She has not gotten much response when trying to help local military families over the past year. But, in part through a weekly Friday night meal for a local food pantry, she has observed the need elsewhere.

“I think the greater need is in the greater Cape Cod community,” DeSilva said, noting far more requests from nonmilitary families for help.

Rifkin has seen a different side of the situation. Before the pandemic, many active-duty personnel were able to get by, even if it meant living paycheck to paycheck. But when children were home from school for remote learning, costs added up and made the situation “tricky,” he said.

A 2019 study conducted by the nonprofit Military Family Advisory Network found that 15.3% of U.S. military families struggled before the pandemic to feed themselves and their families. Of those families, close to 13% were food insecure, which is defined by the U.S. Department of Agriculture as lacking consistent access to enough food to live an active, healthy life.

The network’s study found that active-duty personnel members rely on their communities when they have trouble finding enough food, said Shelley Kimball, the organization’s senior director of research and program evaluation.

Kimball said local faith-based groups or food pantries play an important part in keeping members afloat. She also said that food insecurity can take many forms, from not having enough food to eat to worrying about how to make food last throughout the month.

Nationally, one in eight military and veteran families typically experience some sort of food insecurity, Kimball said. Of those, the majority are faced with hunger, which she said, “is pretty stressing.”

Military members often move a lot, something Kimball said creates unique financial and mental stress. When members move, it costs money to resettle and time to relearn and adjust to where everything is.

“This idea of not having your finances in order can affect (food) security,” Kimball said. “Many members are really hesitant to reveal they are experiencing this.”

Kimball, a military spouse, said military families are encouraged to be “resilient.”

“We are,” she said. “We really are a strong group of people that can handle a lot of change.”

But that resiliency prevents a lot of members from asking for help when they need it, Kimball said. She said there is a sense that they need to be able to “carry it all” and take care of their families, or that the need is greater for other members.

Don Cox, founder of the Massachusetts Military Support Foundation, agreed, saying pride often stands in the way of members getting the assistance they need.

But consider these figures: The salaries of enlisted service members between the pay-grade ranks designated as E-1 to E-5 range between $19,803 to $43,282 annually, depending on military rank and years of service. For service members with family expenses, that can make finances tight, especially at expensive duty stations such as Cape Cod.

At Joint Base Cape Cod, military-provided housing is limited. Service members often need to find commercial housing off-base using Basic Allowance for Housing provided by the government. The allowances vary depending on ZIP code and whether the member has dependents.

The housing allowance is tax-free and comes on top of members’ base pay. On Cape Cod, that allowance ranges from $25,308 for a member without dependents in E-1 rank to $27,036 for an E-5 ranked member.

A number of areas also receive a Cost of Living Adjustment. For 2021, this includes a 4% increase on Nantucket, a 1% increase in Plymouth and a 2% increase on Martha’s Vineyard.

The adjustment does not apply to any of the towns surrounding the base on Cape Cod.

“How do you support a family on Cape Cod with that kind of revenue?” Cox asked.

While military members chose to serve the country, Cox said, they often don’t realize the pay in some places is not enough to cover living expenses such as insurance, utilities and rent. Many go into debt using credit cards to feed their family, he said.

“We get involved because we want to take care of them,” Cox said.

Anybody below the E5 rank struggles with food insecurity, especially if they have a young family, Cox said.

“The worst part about this now, with the pandemic, is the spouse usually has a job to support the family,” Cox said. “When the family can’t be supported because of the pandemic, we like to consider ourselves as a safety net. Not a handout, but a hand up.”

While the pandemic has furthered the issue of food insecurity for military personnel, Cox said the problem “has been going on for years.”

According to a 2019 survey by the nonprofit organization Blue Star Families, which was founded by military spouses to support active-duty personnel, 48% of military spouses said that employment, or lack thereof, is their top issue with military life. Of those military spouses who are employed, 77% of them reported being underemployed.

In 2020, troops for the first time since 2010 saw a pay raise of more than 3%. Paychecks were raised again this year when a key Senate panel approved another increase of 3.1%, which resulted in about $860 more per year for enlisted troops and a $1,500 annual increase for senior enlisted and junior officers.

When the COVID-19 pandemic hit, though, it wasn’t just people in the military who needed food, Xiarhos agreed. The crisis hit everyone, he said.

People criticized the Massachusetts Military Support Foundation for giving food out to people who weren’t active duty military or veterans.

The foundation has run so many events during the pandemic, and when it ends, “we are going to keep going,” said Xiarhos. “But the need is much more prevalent now.”

Even after the crisis is over, there will still be people in need. “It’s going to be a long journey,” he said.