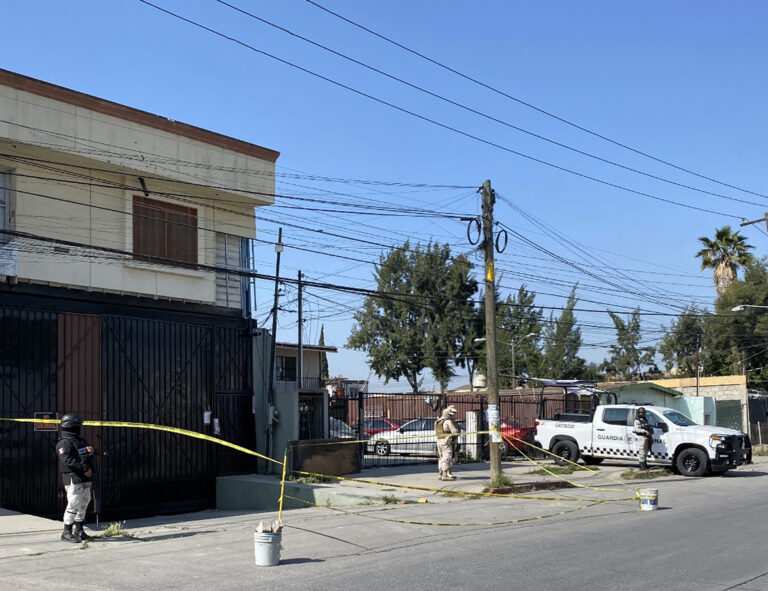 Mexican federal authorities seized illegal marijuana from a tunnel discovered Thursday in a Nueva Tijuana home located across the border from Otay Mesa in San Diego.

The unfinished tunnel — which Mexican federal officials said was meant for smugglers to bring drugs into San Diego from Mexico — was being constructed no more than 50 or so feet from a new National Guard base opened last year in Tijuana.

The sophisticated but incomplete tunnel has ventilation, lighting, rails, a transportation cart, according to Mexican federal officials. According to U.S. officials, it has no exit on the San Diego side of the border.

“The tunnel is incomplete and has no exit on the U.S. side. That is the only information available at this time,” wrote Leticia Zamarripa, a spokeswoman for the Department of Homeland Security.

The tunnel’s entrance was not far from a newly constructed section of the enhanced border wall that former President Donald Trump visited and signed in September 2019.

“Tunnels like this show the determination of drug trafficking organizations to subvert our border controls and smuggle deadly drugs, such as fentanyl, into our country,” said Kameron D. Korte, a supervisory special agent with the Drug Enforcement Administration.

It was also in the same approximate location where federal border agents discovered a 4,309-foot long tunnel in August 2019, which they described as one of the “longest, most sophisticated cross-border drug tunnels in history.”

Neighbors said the home where the most-recently discovered tunnel was located — near the streets Sor Juana Ines de la Cruz and Jose Lopez Portillo streets in the Nueva Tijuana colonia of Otay — had been guarded by elements of the Mexican Army since at least Tuesday. Baja California state investigators arrived early Friday morning with a federal search warrant.

State and federal investigators at the scene said they could not say the amount or estimated street value of the drugs found.

Cross-border tunnels have long been used by transnational criminal organizations to illegally move drugs and people into the United States. More than 70 tunnels have been discovered in the San Diego area since 1993, according to U.S. Border Patrol.

Although many neighbors said they were too afraid to give their name for an interview, several noted the irony of the tunnel being constructed right under the noses of the National Guard, Mexican President Andres Manuel Lopez Obrador’s landmark federal armed security forces that were first deployed in July 2019. Experts say the federal organization has fallen short of addressing Mexico’s security crisis.

In January 2020, the then-national Secretary of Security and Citizen Protection, Alfonso Durazo, along with top Mexican military officials such as Secretary of Defense Luis Crescencio Sandoval, traveled to Tijuana to open the National Guard barracks.

At the Jan. 22 event to inaugurate the space, the national commander of the National Guard, Luis Rodriguez Bucio, reported that the $1.4 million building would house hundreds of men and women who would be deployed throughout Baja California to confront criminal groups.

Under Lopez Obrador, a leftist leader and longtime critic of a U.S.-financed war on drugs, Mexico’s armed forces have taken on increasingly more responsibilities in the country. The National Guard regularly patrols Tijuana, responding to violent crime scenes and seizing drug labs. There are now more than 100,000 members across the Mexico with thousands located in Baja.

Meanwhile, cooperation between the United States and Mexico to target drug cartels operating inside Mexico has unraveled after the Drug Enforcement Administration arrested Mexico’s former Defense Secretary Salvador Cienfuegos Zepeda in Los Angeles in October 2020 on charges that he helped a drug cartel in return for bribes. Cienfuegos was later returned under pressure from the Mexican government, which then cleared him of the charges.

“We’re willing to share (intelligence) with our counterparts in Mexico, but they themselves are too afraid to even engage with us because of repercussions from their own government if they get caught working with DEA,” Matthew Donahue, the DEA’s deputy chief of operations, said earlier this week.

So far, no arrests have been made involving the latest discovery, and Mexican federal authorities insisted there was no information available about the property owner of the home where the tunnel was discovered.

According to the DEA, members of the San Diego Tunnel Task Force, which includes representatives from Homeland Security Investigations, U.S. Border Patrol, the Drug Enforcement Administration and the United States Attorney’s Office, were following up Friday on information obtained from their Mexican counterparts and did not have additional information.