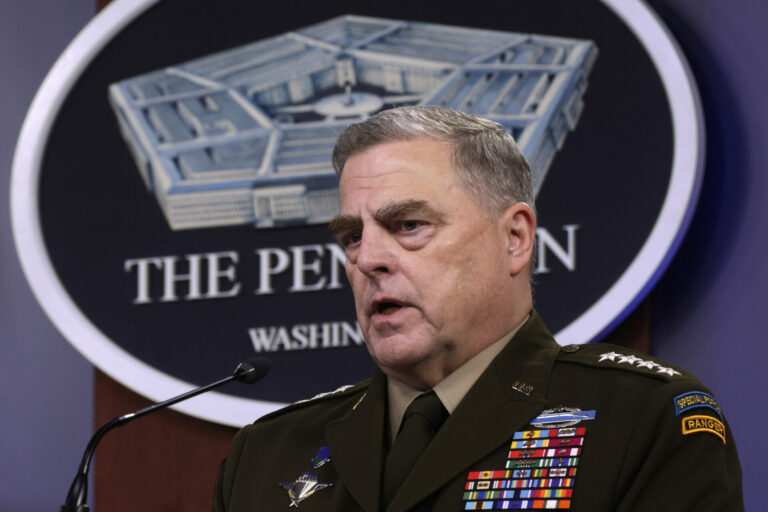 The fall of the U.S.-backed government in Afghanistan to the Taliban isn’t inevitable after American forces leave the country in the coming months, top Pentagon officials insisted on Thursday.

“The Afghan security forces can fight, and they are fighting for their own country now,” Milley said, adding that Afghanistan’s Air Force conducts 80% to 90% of air strikes in the nation. “There’s a significant military capability in the Afghan government and we have to see how this plays out.”

But the U.S. top two military leaders conceded that Afghanistan’s government faces a challenge in fending off a resurgent Taliban, nearly 20 years after the U.S. ousted the group from power following the Sept. 11 terror attacks.

“We expect that this will be a challenge for them,” Austin said.

Biden has said the approximately 2,500 American troops deployed to Afghanistan will be gone by Sept. 11. The withdrawal is being coordinated with NATO allies who have several thousand forces in the country as well.

But the departure of Western forces has raised difficult questions about the stability of President Ashraf Ghani’s government, with the Taliban controlling large swaths of the country and at their strongest level since being ousted from power. Human rights activists have also warned about the loss of women’s rights if the Taliban — who barred females from most jobs and educational opportunities — retake Kabul.

“I think there is a high likelihood that the Taliban will be back in control of the country, maybe as early as the end of the year,” Senate Republican leader Mitch McConnell said during a news conference in Kentucky on Thursday. “And I worry about the future of Afghan women and girls, and that we will end up in a situation much like we found ourselves in before.”

U.S. support will continue to flow to Afghanistan after the withdrawal in the form of funding and logistics, though it will be conducted from abroad, Austin said. No plans have been finalized for military training in other countries.

As it prepares to depart, the U.S. has so far closed one base in Helmand province, flown out the equivalent of 60 C-17 cargo planes worth of equipment, and transferred 1,300 pieces of equipment to the Defense Logistics Agency for destruction or to the Afghan security forces.